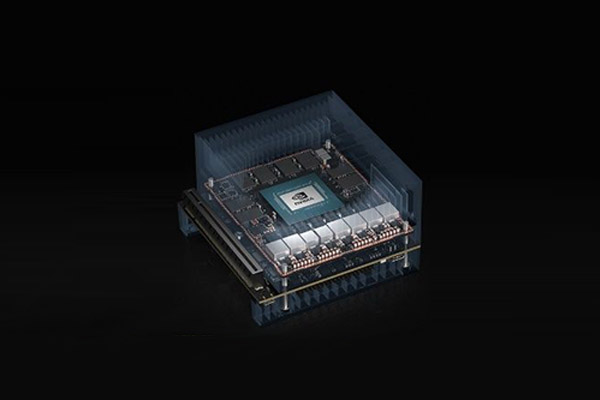 The technical specifications of Jetson AGX Xavier are listed as follows:

The internal structure of the chip is shown in the figure below:

Drive IX belongs to the artificial intelligence layer. Therefore, it is equipped with the most advanced in-vehicle infotainment (IVI) system, realistic 3D maps and terrain models, virtual assistant, and external environment detection. With Drive IX, key metrics of the vehicles can be integrated to enhance drivers and passengers operating and riding experiences. These key metrics are collected and analyzed by the interior and exterior sensors, combined with facial, vocal and gestural recognition technologies.

NVIDIA hopes that Drive IX will become the ultimate SDK for vehicle safety and convenience. To demonstrate its capabilities, it alerts drowsy drivers to keep their hands on the steering wheels. Also, utilizing facial recognition and gaze tracking, it automatically detects the drivers and the vehicles to raise the garage doors upon arrival.

DRIVE AR enables manufacturers to seamlessly integrate the vehicle interior with the exterior surroundings to create a detailed driving information. With easy-to-access visualizations, the driver (and ultimately the passengers of an autonomous vehicle without a driver) can better understand the performances and operations of the vehicles. Drive AR is oriented to for infotainment applications. Drive AR supports computer vision, computer graphics, human-computer interaction, AI applications. It is a powerful driving force for the in-car augmented reality interface.

The onboard 2×4, 2.54mm, 8-Pin (J508) terminal can achieve external control operations such as recovery, reset, and power-on.

The circuit of the power supply part is shown in the figure:

The Jetson carrier board includes a 10-pin (2×5, 2.54mm) audio panel header (J511). This can be used to connect to a standard PC audio panel. It supports connection to microphones, earphones, power speakers, etc.

Multiplex interface. It can be directly plugged into USB devices (such as U disk, keyboard and mouse, Hub, etc.). It can also be plugged into hard disks with eSATA interface or connected to an eSATA to SATA cable to ordinary SATA hard disks.

Used to connect the monitor.

There are two Type-C and one Micro-USB on the carrier board. Type-C supports the display and PD power supply. Micro-USB is mainly used for debugging.

Xavier leads to 3 channels of SPI, which supports data transmission at a maximum frequency of 65MHz.

Xavier leads to two CAN channels, which are led out through the 40-Pin expansion interface. You need to connect the level conversion chip manually. The maximum bandwidth supported is 1Mbps. The manual states that it supports CANFD, but it obviously does not match the high-speed bandwidth of CANFD.

Xavier is definitely a benchmark product in the autonomous driving industry at the moment. Although NVIDIA recently released an Ampere-based GPU and an autonomous driving computing platform with a computing power of 2000 TOPS, Xavier is currently the best in terms of ecology, applications, and resources. As an automotive engineer, Xavier’s help to our work is tremendous.

In the direction of autonomous driving, Nvidia has achieved an unprecedented Robotaxi computing platform with a computing power of 2000 TOPS through the combination of two Orin SoCs and two GPUs based on the Ampere architecture, with an overall power consumption of 800W.

Xavier powered Ecotron ADCU are facing the future of the autonomous driving industry. The powerful Xavier together with the state-of-the-art Ecotron engineering makes Ecotron ADCU a rocket booster for your smart EV applications!