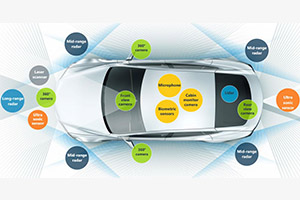 Self-driving cars perceive the environment through sensors, which are like the eyes of humans. There are many types of sensors, such as cameras, ultrasonic radars, millimeter-wave radars, and LiDARs.

Due to the different approaches of autonomous driving technology, the levels achieved are different. The sensors deployed are different as well. An example to this difference is LiDAR. Under the current technical conditions, LiDAR is a shortcut to achieve L3+ autonomous driving. L3 intelligent driving vehicles are expected to drive the mass production of LiDAR in 2022. Major car companies, especially traditional car companies, choose the autonomous driving approach with cameras as the main sensing device to seize the opportunity in the field of autonomous driving. This brings scale advantages with cost advantages. The scale effect will further promote the maturity of technology. Costs will be reduced, and the industry will have a virtuous circle.

The camera can collect image information, which is the closest to human vision. The collected images can be analyzed by computer algorithms to identify rich environmental information, such as pedestrians, bicycles, motor vehicles, road trajectories, curbs, street signs, signal lights, etc. Distance measurement and road tracking can also be realized through algorithms, to achieve forward collision warning (FCW) and lane departure warning (LDW).

Cameras are widely used in the automotive field. Such technology is very mature with low costs. The applications of automotive camera can be divided into monocular, binocular, and multi-eye. The installation positions can be divided into front view, rear view, side view and surround view. At present, Mobileye is at the forefront of the development of monocular ADAS in the world.

The sense of three-dimensional space is not strong.

It is greatly affected by the environment, and the recognition rate is greatly reduced in the dark night, rain, snow, fog, and other low visibility conditions.

Millimeter-wave wavelength (1-10mm) is between microwave and centimeter-wave, so millimeter-wave radar has some advantages of microwave radar and photoelectric radar, and is very suitable for applications in the automotive field:

Ⅱ.77GHz frequency band: The frequency is relatively high. The radar performance of this frequency band is higher than that of the 24GHz radar. It is mainly used to detect the distance between vehicles and the speed of the preceding vehicle, which is the basis for realizing active braking and adaptive cruise controls.

Attenuation in high-humidity environments such as rain, fog and snow.

A LiDAR is a radar system that emits a laser beam to detect the position, speed, and other information of a target. Its working principle is to launch a laser beam to the target, and then compare the received echo reflected from the target with the transmitted signal. After calculations and analysis, the relevant parameters of the target can be obtained, such as target distance, azimuth, altitude, speed, pose, and even shape parameters.

A LiDAR consists of laser transmitter, optical receiver, turntable, and information processing system. Specifically, mechanical radar drives the overall 360-degree rotation of the optical-mechanical structure through the motor, which is the most classic and most mature mechanical structure of LiDAR. Semi-solid radar means that the transceiver module is stationary and only the scanner moves mechanically. The point cloud data of the surrounding space is obtained. The three-dimensional space map around the vehicle is drawn in real time, which is the decision basis established for the vehicle control.

Unable to identify color patterns, text and other signs.

The same applies for unmanned systems, relying on GPS + IMU to know where you are (longitude and latitude) and which direction you are driving (heading). Of course, IMU can also provide richer information such as yaw rate, angular acceleration, etc. This information contributes to locating and decision controls of autonomous vehicles.

Disadvantages: The faulty system will affect the navigation performance of other systems if it cannot be correctly judged and isolated in time when deep combination is performed. Of course, in shallow combination, it is also necessary to judge and isolate the abnormal navigation system in time. It is meant to avoid affecting the integrated navigation accuracy and improve the stability and reliability of the system.

Different companies will choose distinctive solutions based on different demands from various customers. However, those solutions share some common characteristics. For example, in an autonomous driving system, the 3 most computational power demanding features, in sequence, are the image recognition module, the multi-sensors data processing module and the fusion decision module.

Domain control has the advantage of modularizing the entire car on-board electronic system by splitting functionalities into singular domains. This helps with function safety and network security of each subsystem. It also simplifies the development and deployment of autonomous algorithms. Domain control further makes it easier to extend functionalities in each subsystem. As autonomous driving technologies develop vigorously, more and more Tier 1 and other suppliers start to pay attention to this field.

Black Sesame A1000 is designed specifically for embedded intelligent systems. It supports autonomous driving functions such as sensor fusion, environment perception, and path planning. Infineon TC297 has a TriCore architecture and has an operating frequency of 300MHz. Moreover, it has 728KB + 8MB capacity and ECC (error correction coding) RAM protection. Ecotron’s ADCU is designed based on the ISO26262 standard and supports ASIL-D safety level requirements. Engineers can develop vehicle control and functional safety-related strategies based on this MCU.

Autonomous driving domain control units have come a long way from their early days as mere ideas. Now they are ready to hit the road. Even though different manufacturers have different takes on perspectives such as product road maps, performances, safety, costs, they are all pushing on the discovery for the future era of smart networking. In the near future, as vehicles’ electronic and electric architecture (EEA) adapts the design based on domains, the industry expects that the next 3 to 5 years are the growth period of next generation EEA.

Ecotorn’s ADCUs are the product of and for the future autonomous driving industry. The powerful microcontrollers, advanced architecture, together with the state-of-the-art algorithms, make Ecotron products the best choice for your next smart EV project.