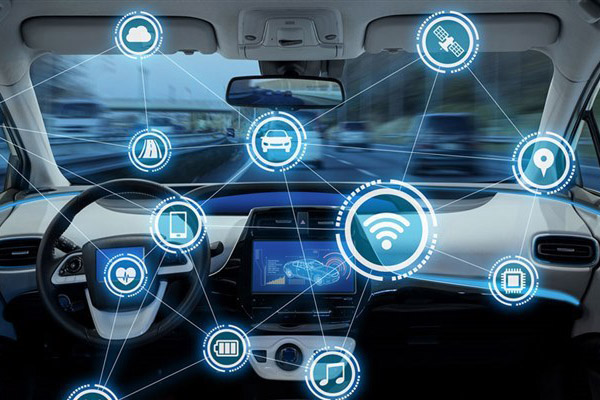 What is an intelligent connected vehicle?

In a narrow sense, the intelligent connected vehicle is equipped with advanced onboard sensors, control units, actuators, and other devices. This vehicle can integrate modern communication and network technologies to achieve V2X intelligent information sharing and exchange. With those functions, the intelligent connected vehicle can achieve complex environmental perception, intelligent decision-making, and functions such as pedestrian coordination and control execution. People can have a safe, comfortable, energy-saving, and efficient driving experience in this vehicle. Eventually, the autonomous driving system on the vehicle can replace human drivers.

In a broad sense, the intelligent connected vehicle can sense the environment independently and is a core component, a node, in the intelligent transportation system. It can achieve wireless communication and information exchange with vehicles, roads, pedestrians, and business platforms through onboard information terminals. The most important part of the intelligent connected vehicle is the autonomous driving control unit. The industry’s development focus now is to improve safety, and the ultimate goal is to let this vehicle reach unpiloted driving.

Specifically, we can understand it from the classification of autonomous driving. There are two primary standards for the classification. One is formulated by NHSTA (National Highway Traffic Safety Administration), and SAE (Society of Automotive Engineers) International issues the other. These two standards have the same classification with only slightly different details. Currently, most people use the SAE standard.

What are the 5 different levels of autonomous driving?

L0 is purely manual driving. The vehicle is only responsible for implementing the driver’s operation and does not carry out any driving intervention. Some early warning auxiliary functions can also be counted in this category.

The boundary between L0 and L1 is the process of intervention in vehicle control. In the L1, the driver gives up part of the control rights to let the intelligent control system take over some steering wheel, throttle, or brake responsibilities. Here are some examples: the throttle and brake are not used when the vehicle is in the adaptive cruise control. When in the case of automatic emergency braking, the brakes are not used. When the vehicle uses a lane-keeping assist system, it takes the initiative to correct the direction. However, these auxiliary functions work separately, and the primary purpose is to relieve fatigue of the driver. Moreover, these functions still require the driver to take the lead and concentrate on driving.

From L1 to L2, the intelligent control system and the vehicle need to be highly coupled. The intelligent driving control unit processes input information and decisions to achieve the combined driving tasks. However, the driver still needs to keep hands and feet on the steering wheel and brake pedal at any time. For example, the ADAS (Advanced Driver Assistance Systems) is in the L2 level of autonomous driving.

At the L4 level of autonomous driving, the vehicle can achieve fully autonomous driving in confined areas. This means that the driver does not need to do anything in the city or on the highway. After autonomous driving is activated, the vehicle can perform tasks including turning, changing lanes, and accelerating on its own following the set road rules (such as with smooth traffic flow, standardized road signs, and prompt lines on highways). Except for severe weather, unclear roads, accidents, or the end of the autopilot section, the system provides the driver with sufficient transition time.

The leap from L4 to L5 requires the vehicle to operate in full-region, all-weather autonomous driving. The vehicle needs to be capable of responding to environmental changes such as geography and climate. It should complete any driving task under any weather and road conditions, without any operation by the driver. The driver does not need to be in the vehicle, and the vehicle does not need to be equipped with a steering wheel, accelerator, and brake.

Looking at the current autonomous vehicle development, which stage are we standing?

In the field of autonomous driving, there are currently two major technical implementation routes:

The second is the “unpiloted driving” route represented by internet companies such as Waymo. Their environmental perception is based on Lidar as the core technology and integrates multiple other technologies such as cameras and millimeter-wave radars. They use complex perception fusion algorithms to make control decisions to achieve unpiloted driving.

The unpiloted driving vehicle is essentially a mobile service robot with high-level artificial intelligence. It is related to autonomous vehicles and assisted driving, but there are more significant differences in development goals and core technologies.

The technical nature of the autonomous vehicle is the superposition of modules and functional extensions of the automotive driving system. Its purpose is to provide drivers with a more convenient and safer environment in driving. Autonomous vehicles are mainly based on the development and innovation of traditional vehicles.

Differently, the essence of the unpiloted driving vehicle is a brand-new mobile robot capable of autonomous navigation and control operation. By replacing the driver with artificial intelligence,  its appearance design and application scenarios are not limited to existing models.

Most of the research and development of autonomous vehicles use traditional models as experimental objects in today’s industry, but unpiloted driving vehicles are more developed from robot platforms. After unpiloted driving vehicles enter commercial applications, they can be combined and reconstructed according to actual needs. For example, some autonomous driving companies have already eliminated steering wheels and brakes in their experimental models.

The core technology of autonomous driving is automatic control technology, while the core technologies of unpiloted driving are immediate and real-time spatial modeling calculation processing and artificial intelligence technology. Therefore, automobile manufacturers have a dominant position in autonomous driving and have formed close cooperation with sensor supplier companies. On the other side, the main body of research and development of unpiloted vehicles, Internet technology companies such as Waymo, has intelligent network connection attributes.